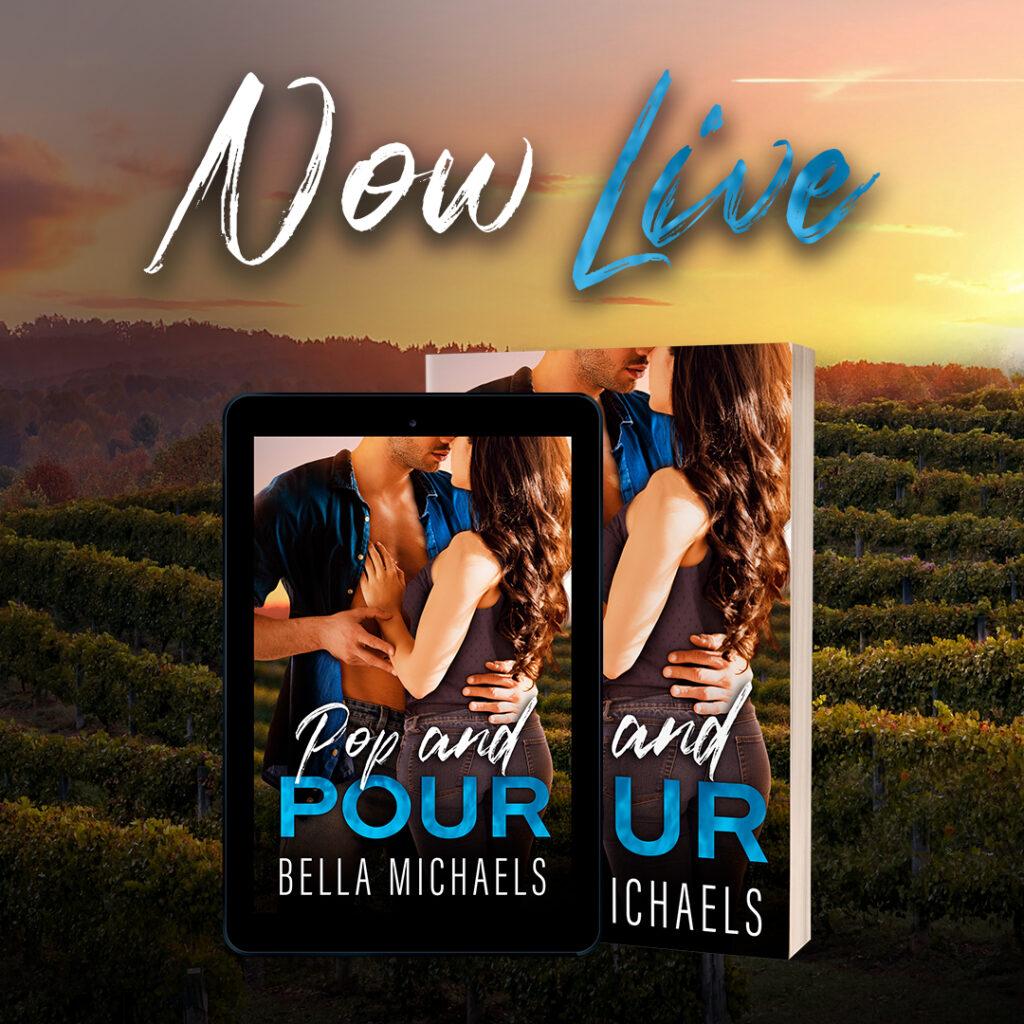 The first book in a brand new steamy, small town romance series is live on Amazon and in Kindle Unlimited. Here’s a sneak peek:

I spun around in my chair. Sure enough, the one woman I’d never curse in front of stood at the entrance of my office. Arms crossed. Definitely pissed.

“I have to go,” I said, pressing the button on my phone, effectively hanging up on my brother.

“I was just telling Neo what someone said about me. I’d never use that kind of language myself.” Somehow, I kept a straight face.

“At least you know it’s not true.” Another straight face.

“Mm-hmm,” she said, obviously disagreeing with me, for good reason. Sitting down across from me, she put something on her lap. Looked like a magazine.

Mom frowned, which definitely didn’t improve my mood. I’d just been venting to my younger brother that another of our tasting room associates quit. On top of that, our sister’s harebrained idea to hold a Harvest Festival was falling onto my lap, as if harvest season wasn’t a busy enough time already. As expected. It actually wouldn’t be so bad if she wasn’t about to head to Italy for three months.

“Min is killing me with this festival. And I just finished an interview that didn’t go well this morning, so we’re still short a tasting room associate until I can find someone.”

“Wish I could help, Cos-i-mooh.” She smiled after emphasizing the mooh at the end. It was an “I know you asked me to stop saying that twenty years ago, but I’m the woman who gave birth to you so . . . no” smile. I didn’t bother reminding her. She would only launch into the story of how I was obsessed with cows, or “moo-moos,” as I apparently called them. And would probably whip out pictures of my first cow-themed birthday party. Better to let it drop.

I looked down at my phone for the time. “Dad was just here this morning, said your flight was eleven tonight?”

I personally hated red-eyes, but to Italy, it made sense. It was a delayed retirement trip, and my parents were finally “going home,” as my mother said. I hated to remind her that she and Dad were two generations removed from “home,” and that she’d lived in upstate New York all her life.

“He is seriously going to have you sit at the airport for the entire afternoon?”

“What do you think?”

I thought there was as much chance of convincing my father that they were unlikely to get stuck behind an accident and miss his flight as of my mother ceasing to call me Cosi-moo for good.

“You have your passports? Chargers?”

“You got some cash already, right? Dad said he was going to the bank last week.”

“This isn’t our first rodeo, Cos. We’re fine. I promise.” Mom leaned forward and plopped a magazine on my desk. “Did you see this yet?”

I picked it up. Homegrown: A Guide to Wine in the Finger Lakes. I hadn’t seen it. Completely forgot it was coming out today.

“You look good, Cos,” she said of the black-and-white photo of me on the cover. It was a headshot I had taken last year, when my parents first announced they’d be retiring this summer. Leaving me in charge. Of the whole damn vineyard. Of a legacy.

I took a deep breath, the headline making this whole thing more real, somehow, than the fact that my parents were about to board a plane leaving me solely in charge. Never mind that I’d been basically flying solo for the past few months. Or that I spent my entire life, with the exception of college, in Grado Valley. Working at the vineyard.

“You know I love you with your glasses. But you could have smiled even a little. You look serious.”

“Really, Mom?” Me not smiling or being the life of the party like my father was only one of many differences between us. One my mother was acutely aware of.

“Okay, okay. But it’s not like you don’t know how to smile.”

“Just that I don’t do it as often as everyone would like,” I muttered.

“If by ‘everyone,’ you mean your dad, that’s just not true. He loves you exactly as you are.” Unlike the face that stared back at me from the cover of the magazine, my mother’s grin reached her eyes, crinkled them at the corners. She was sunshine to my clouds. Always had been.

Reaching out, she grabbed my hand, which was still gripping the corner of the magazine. “You will be fine, Cos. Better than fine. You’ve done more for Grado Valley in the last five years than either of us have done in ten. You know all of it like the back of your hand. And you have your brothers. You’ll be more than fine.” She squeezed my hand. I held on tight, as if I was a boy of five and not a man of thirty-two.

“I know,” I told her. The half-truth tasted sour in my mouth. “You guys don’t worry about a thing. Enjoy Italy,” I said. “You deserve it.”

That much, at least, was true. If anyone deserved this retirement trip, my parents did. They’d built Grado Valley Vineyards from a card table in the barn to an estate that employed dozens of people on top of my own family. It was incredible, really.

With a final squeeze, she let go of my hand and waved toward the magazine. “Read it,” she said. “Never mind you look like a model on the cover.”

I rolled my eyes.

“It’s a great article. No hint of a cocky son of a bitch at all.”

And she probably did in private, but not around us. Didn’t want to condone bad behavior. Never mind that the youngest of the four of us was no longer a child at twenty-five. Old habits died hard, I guessed.

“You better get going before Dad sends a search party.” I stood and made my way around the desk. Putting my arms around her, I pulled my mother close. Closing my eyes at her familiar scent, I said a silent prayer to Saint Christopher to keep her and my dad safe. I might not have gone to church, much to my mother’s horror. Plus, it couldn’t hurt.

“Love you, Cos-i-mooh,” she said, pulling away.

“Love you, Mom. Tell Dad not to drive like a maniac to the airport. You have more than enough time,” I said with emphasis on more.

“I will, sweetie. We’re just a phone call away. But I’m not worried at all. You got this.”

She fully believed that. Believed in me.

I just couldn’t fuck this up.

Get Pop and Pour here or free with Kindle Unlimited and be sure to come tell me what you think in our reader group on Facebook or on TikTok if you’re there.